This transformer is outside 13, Forest Hill Road, Henderson. It depicts New Zealand Wood Pigeons gorging themselves on the ripe berries of the nikau palm. The backdrop is the sea and the volcanic Rangitoto Island.… The construction of the New Lynn Railway Station and Bus Interchange was accompanied by extensive landscaping. Native Nikau palms were planted, creating a tropical feel. Sometimes these plants can look a bit scruffy, like in this example, but they will shed the old leaves and look like new.… Nikau palms (Rhopalostylis sapida) are NZ natives. Their leaf base encapsulates a bulbous growth cone, and when the leaf falls off, a flowering bract is revealed. In the picture above, the flowers have just emerged from the protective sheath.… This is the sign at the entrance to the tiny beach community of Cornwallis (map). It depicts native icons: nikau palm, kowhai blossom, and kereru (NZ wood pigeon). This sign appears on several approaches to Glen Eden. Here we show the one that is located in Glenview Road, next to Waikumete Cemetery, one of the largest cemeteries of the Southern hemisphere.
Focal point of the sign is the Art Deco style Playhouse Theatre.…

Ambrico Place (map), New Lynn, is a no exit street off Rankin Avenue, oposite of the Monier Brick Factory. Its entrance is flanked on either side by such a mosaic sign – seen here in the light of the morning sun with the background totally in the shade – recalling some of the local features: the kiln (subject of yesterday’s post), stacks of bricks that would have been produced here, pottery items, and creepy-crawleys like gecko and centipede, as well as nikau palms.…

Waitakere Central, the administrative Centre of Waitakere City, is connected to the main centre of Henderson by an overbridge which also is the only access to Henderson railway station. This window shows the unmistakable art by Dean Buchanan, celebrating Auckland’s wild West Coast and the bush of the Waitakere Ranges.… This transformer is outside 75 Royal Road, Massey. Painted by local artist Monique Endt with bush scenes, there was also some involvement of Royal Road School, coordinated by Kelly Knowles.… This transformer stands outside 13 Forest Hill Road, Henderson. It appears to be a replacement of an earlier transformer, also painted by Monique Endt, the new box sitting on a stately concrete pad, elevated from the ground.… 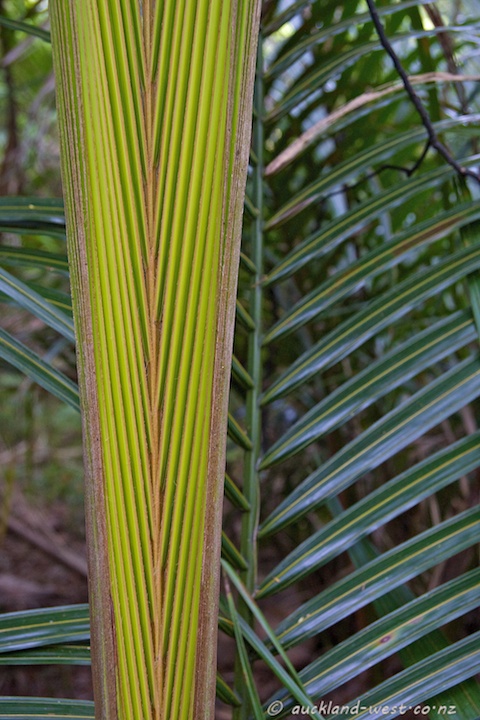 On a recent outing to Forest and Birds’ Matuku Reserve above the Bethells wetlands, I noticed this beautiful colour in amongst the predominantly brown/grey and dark green tones: The young shoots of the Nikau palm (rhopalostylis sapida) start out as tightly packed spikes which then open out gradually, harmonica style, revealing these unexpected hues.…